As of March 31, 2017 there are 16,372 children registered and waiting for a space in a licensed child care facility in Manitoba.  Of those, 9,187 need care within three months, to June 30, 2017.     The majority need space in Winnipeg, however there all child care waiting lists all over the province.

An MCCA/Probe Research survey found that on average, it takes 14-15 months to get a licensed child care space, depending on age of the child. 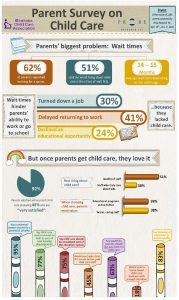 The Government of Manitoba continues to promise a long range plan for child care.  Since being elected in April 2016, it has made 2 announcement:

May 10, 2017 – announced up to  $2.8M for community based capital projects.  Funds are for new non-profit child care centres or renovations to existing centres for the purposes of adding new child care spaces.  Grant recipients receive up to 40% of capital costs of $600,000 for projects in community owned or leased buildings.